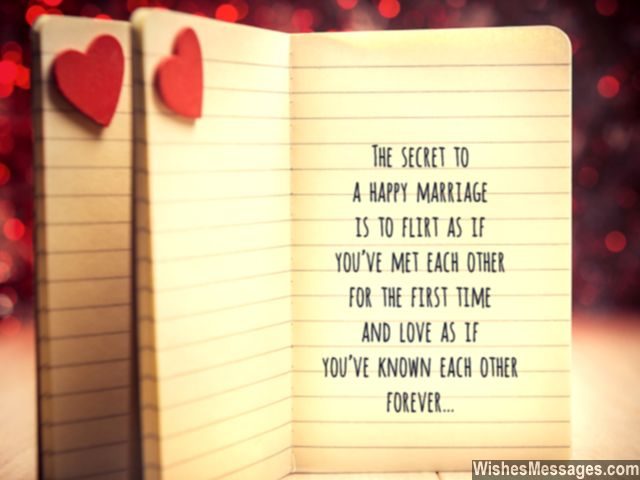 First Anniversary Wishes for Wife: Beautiful quotes, romantic promises and the sweetest memories – these are the things that should mark the 1st year of your married lives. Leave no stone unturned to wish her a Happy Anniversary. Write cute notes on a greeting card, post heart-melting messages on her Facebook and share some of the mushiest stuff about love on Pinterest. Poke her with flirty texts throughout the day and make her feel like the most important woman in the whole world. Little things like these will go a long way in making your relationship stronger. It’ll pave the way for the amazing journey that you both as husband and wife will go on together, for the rest of your lives.

2) Our first year of marriage has proved that no matter how fiercely we fight with each other like cats, we always end up loving each other like swans. Happy 1st anniversary.

4) May we have many more years of glasses to clink, surprises to throw, cakes to cut, gifts to give and smiles to put on each other’s faces. Happy first anniversary.

5) Real relationships are a crazy ride, full of ups and downs. They are a journey, rife with tough times and bad phases. They are never perfect. But despite all the flaws, fights and arguments, real relationships stand out as one of the most beautiful, amazing and innocent things life has to offer. There nothing like it, and never will be. Thanks for giving me mine, happy anniversary. 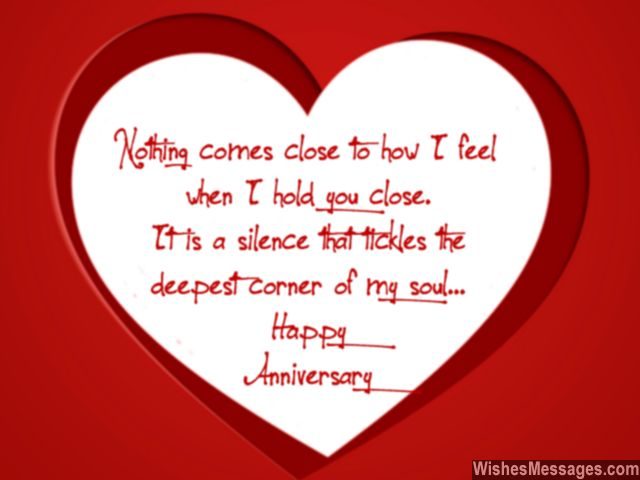 6) Nothing comes close to how I feel, when I hold you close. It is a silence that tickles me in the deepest corner of my soul. Happy anniversary.

8) Anniversaries will come and go, but our lives will forever continue to be a celebration of togetherness and romance. I love you.

9) I am one of the few lucky men in this world who can say that their best friend, girlfriend and wife are the same woman. Happy first anniversary.

10) Marriage is like true love… a journey that has a beginning, but no end. Happy anniversary to my forever. 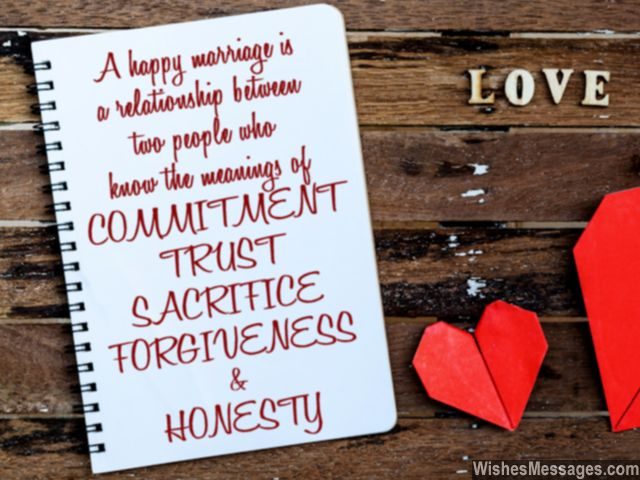 11) A happy marriage is a relationship between two people who know the meanings of commitment, trust, sacrifice, forgiveness and honesty. Happy anniversary.

12) On our anniversary, let’s not look back at the memories we’ve made, rather let’s look ahead at all those that are yet to come. Happy 1st anniversary.

14) Happy first anniversary to the First Lady of my world. I love you.

15) If my life was a boat floating over the choppy waters of destiny, you are the set of sails which will see me through. Happy first marriage anniversary. 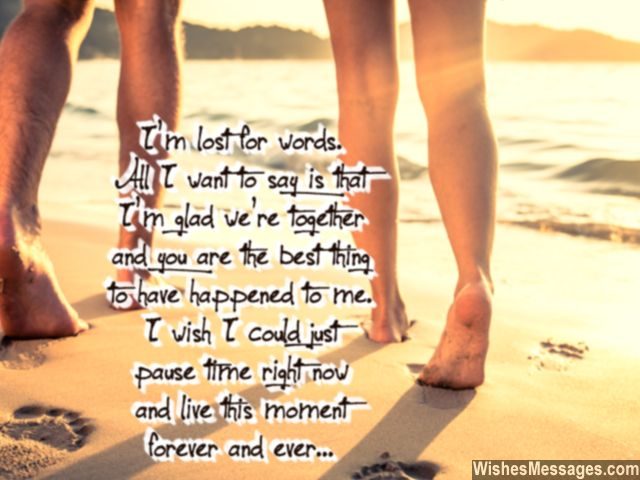 16) I’m lost for words. All I want to say that I’m glad we’re together and you are the best thing to have happened to me. I wish I could just pause time right now and live this moment forever. Happy anniversary.

17) Thanks for making sure that the first year of our married lives was perfect. I promise, I’ll do everything I can to make sure that every single year of the rest of our lives is perfect – exactly how you deserve it to be. xoxo

18) An anniversary is like a stock-take day for a marriage. Our annual stock-take says that we have happiness in surplus. Happy 1st anniversary.

19) You know you’re in a real relationship when making sacrifices for someone else, makes you happy from within. I love you, happy anniversary.

20) If time could be played over and over again in a loop, I would put the first year of our marriage on repeat mode because it has been perfect. Happy first anniversary dear. 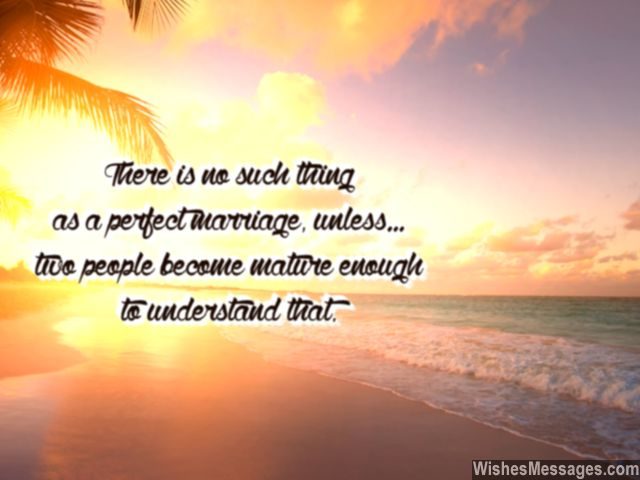 21) There is no such thing as a perfect marriage unless, two people become mature enough to understand that. We’re one such couple. Happy anniversary sweetheart.

22) I regret the decision of marrying you last year. I should have married you the very day my heart was smitten by yours. xoxo

23) After many quests which included fighting, arguing and making up like crazy, we just finished the first level in the game of our MARRIAGE. Whoever knew leveling up would be so much fun? Happy 1st anniversary.

24) Happy first anniversary to the woman who has stolen my heart, but given me beautiful her soul in return.

25) It doesn’t matter whether we celebrate our paper, wood, cotton or silver anniversary, because our love will always be as pure gold. Happy first anniversary. 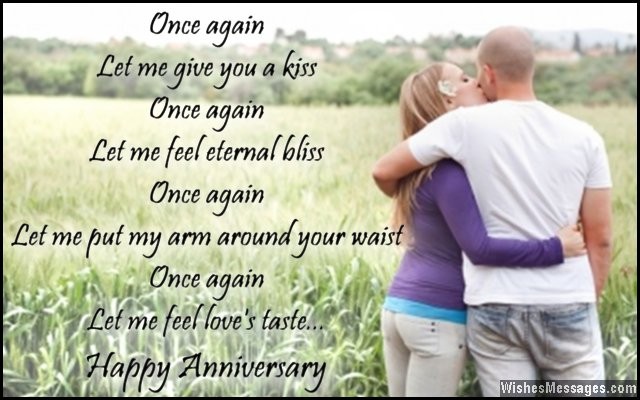 28) Time may be a metric to measure the number of years in our marriage, but our love for each other is timeless. Happy 1st anniversary.

29) Tough times and bad phases in life will come and go. But none of that matters as long as we’re in it together, now and forever. Happy anniversary.

30) Our first marriage anniversary is a reminder of the fact that you make great decisions in life – including the one to say YES and get married to me. Happy first anniversary. 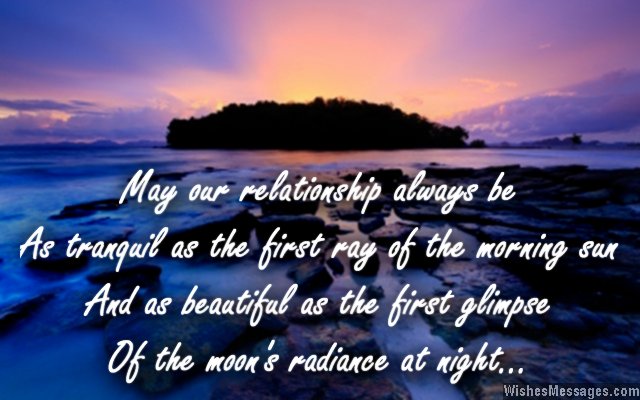 31) May our relationship always be as tranquil as the first ray of the morning sun and as beautiful as the first glimpse of the moon’s radiance at night. Happy first anniversary.

32) I don’t need an anniversary to remind me to be grateful to you. Waking up to your beautiful face every day is the best reminder ever. Happy first anniversary.

33) Staying with you doesn’t feel like being married at all. It feels like having a fun and romantic sleepover with my girlfriend every day. Happy 1st anniversary, thanks for making our lives so perfect.

34) Congratulations for tolerating me for 365 days. The next round of torture is about to start. Happy first anniversary.

35) May the beginning of the fairy tale of our marriage eventually end with Happily Ever After. Happy 1st anniversary. 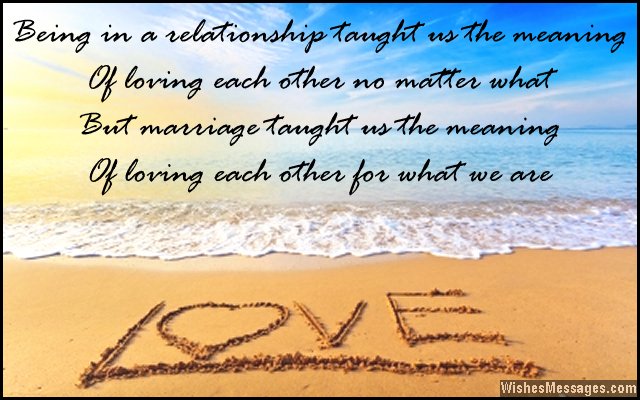 37) Our first anniversary is special, but the way in which you make every day as romantic as the first day we met, is even more special. I love you.

38) Falling in love with you was great, getting married to you was awesome. But getting a kiss from the woman of my dreams every single day is the best thing ever. Happy 1st anniversary.

39) Marriage is like a see-saw. Sometimes it is up, sometimes it is down. But the most important thing is that we’ll have fun every single step of the way. Happy 1st anniversary.