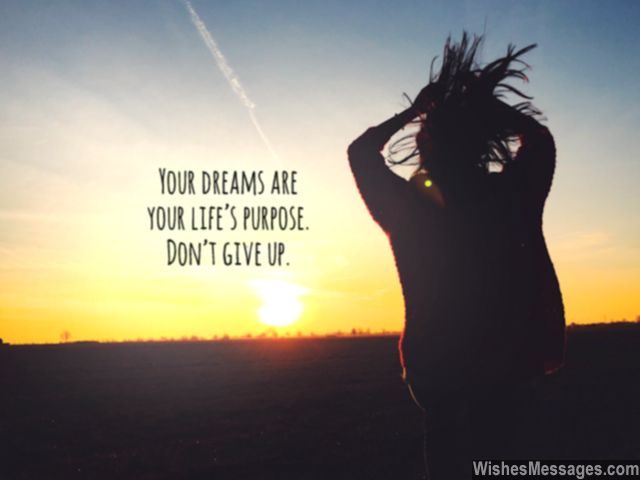 Never Give Up Quotes: Inspirational notes and motivational words are the best way to pump yourself up when you’re down. Life is all about going all in to pursue your dreams. Don’t let failure pin you down and push you against a wall. Fight back and look at every set back as a challenge. Being successful is all about having the courage, determination and perseverance to keep taking hits while moving forward. You will be able to relate your life’s struggles with the essence of this post. It’s all about carrying an attitude that refuses to relent. Read through, share it on Facebook, Twitter and Pinterest. Spread the energy.

1) Your dreams are your life’s purpose. Don’t give up.

2) Never forget the people who asked you to give up, so that you can remember to call them to your success party and make them eat up their own words. 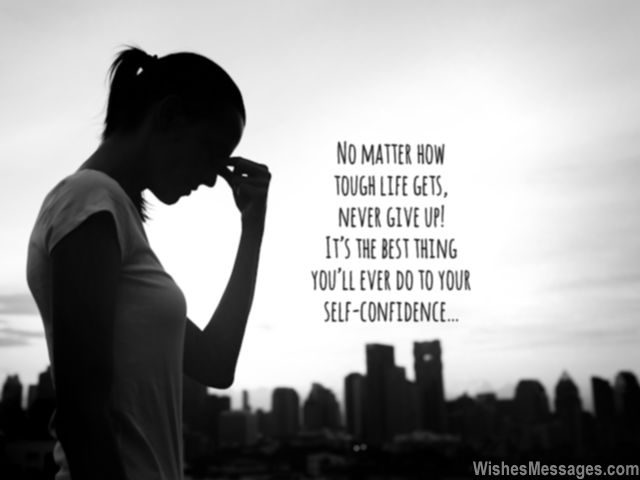 6) No matter how tough life gets, never give up. It’s the best thing you’ll ever do to your self-confidence.

7) No matter how long the journey, EVERYTHING is possible… as long as you have the courage to fight EVERYTHING that’s thrown at you along the way.

9) The more you fail, the more likely you are to win. Never give up.

10) When your attitude is to take things lying down, giving it all up can never be too far. 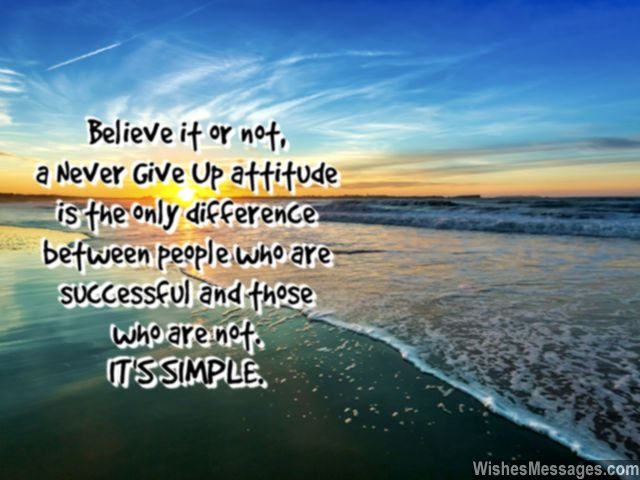 11) Believe it or not, a Never Give Up attitude is the only difference between people who are successful and those who are not. It’s simple.

13) Surround yourself with people who push you and encourage you to never give up, even if their words sound unrealistic. These are the people you will thank when you finally succeed.

14) Never give up on a dream just because it takes too long. Time will fly, but it will never come back again.

15) Defeat is when you are thrown down by your opponent in the ring because you got knocked out. Giving up is when you don’t have the courage to get back on your feet and last another round. Never, ever, confuse defeat with giving up. 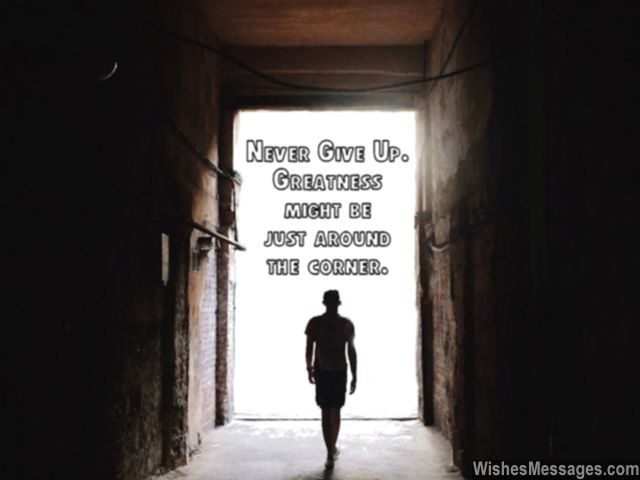 16) Never give up. Greatness might be just around the corner.

17) When fate and destiny don’t seem to be going your way, fight back and show them that there’s nothing they can do to ruin your day. Never give up.

18) It doesn’t matter where you are today, as long as you’re headstrong about being where you want to be tomorrow. Never give up.

19) Never give up. In life, there’s no such thing as an ending. Even failure is a new beginning.

20) Follow your dreams and do what your heart tells you to. There will be bumps along the way but never give up… your destiny is waiting for you at the end of the long road. 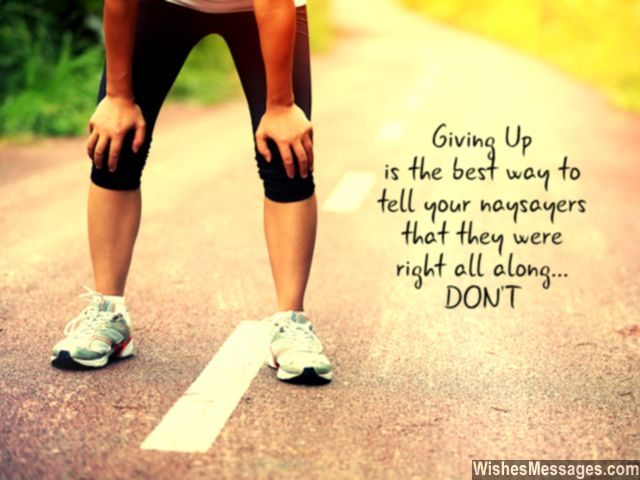 21) Giving up is the best way to tell your naysayers that they were right all along… don’t.

22) Life is like rowing a boat in the sea. No matter how lost you are, the hope of reaching a shore is what will keep you going… while giving up is a sure shot way of drowning.

23) Hit rock bottom? Great, that means you can’t go any lower. Stand up and start climbing.

25) Give it up or give it a go – this is a choice that will change your life. Make the right one. 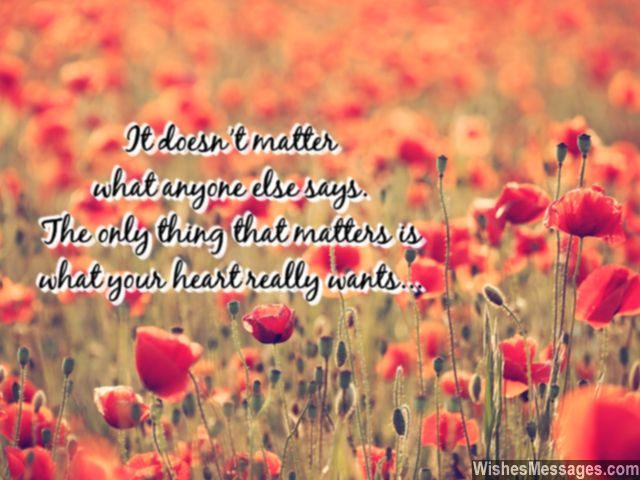 26) It doesn’t matter what anyone else says. The only thing that matters is what your heart really wants.

27) There are no excuses for giving up. You might be able to convince someone else, but what will you say to yourself when you look in the mirror decades down the line and think about all the missed opportunities in life?

28) Never give up. Great things happen to people who have the courage to go against the tide and win, no matter how long it takes.

29) The only time when the phrase Never Say Never does not apply is when you tell yourself to never give up.

30) Winners aren’t special people. They are just ordinary human beings who had the courage to put it all on the line for their dreams. 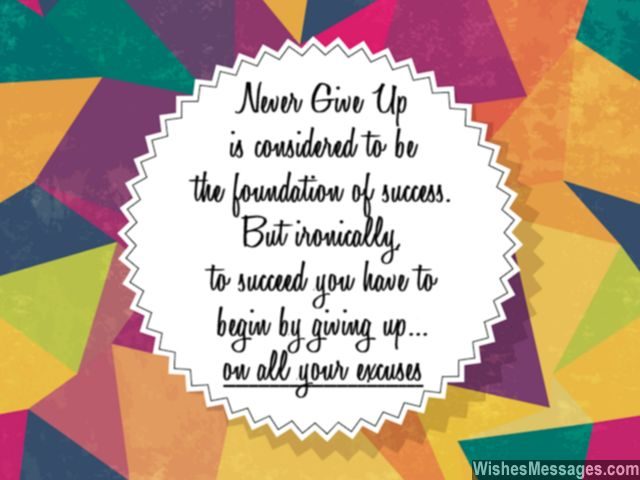 31) Never Give Up is considered to be the foundation of success. But ironically, to succeed you have to begin by giving up… on all your excuses.

32) It does not matter if you give up before the race or just before the finish line. Giving up is giving up because the end result will be the same.

33) Being persistent is the easiest way to be lucky. Never give up.

34) Never give up if you think you are wasting time by chasing your dreams. Think about the time you will have wasted on your dreams if you gave up. Keep trying, keep pushing. 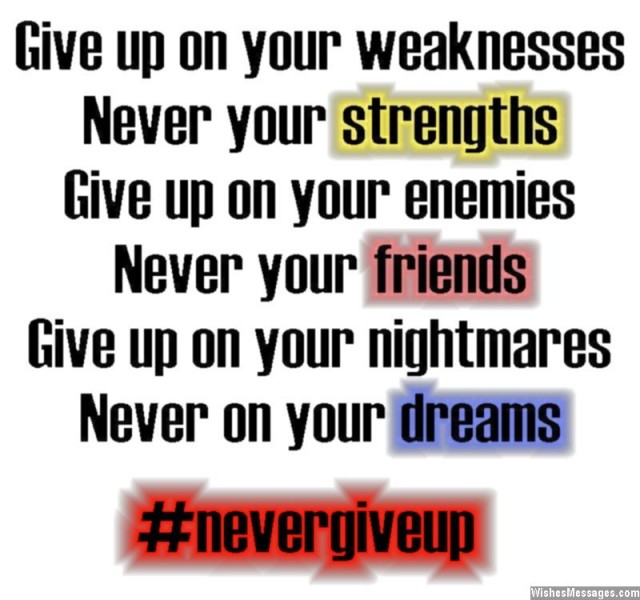 37) Whenever you feel like giving up, remind yourself of all the reasons that pushed you this far.

38) The easiest way to never give up is to remind yourself how resentful and regretful the rest of your life will become if you do. There can be no bigger regret than knowing how close you were to your goals, after you gave it all up.

39) It is a myth that winners never give up. They do, but only temporarily to catch their breath and fight back with everything they’ve got.

40) There’s nothing you can say to justify the moment you gave up on your dreams. The only way to redeem yourself is go all in and achieve them, no matter how tough them seem or how long it takes.